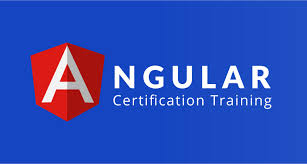 Why should you take Angular Certification Online Training?
• Google, YouTube, Cisco, Samsung, Nike, Forbes, Microsoft, BMW, and several more Fortune 500 companies have been using Angular as their unique front-end development framework to provide an engaging user experience.
• Angular is a highly puissant cross-platform feature permits developers to build several progressive web applications along with mobile applications
• It is mentioned on Indeed.com that the approximate average salary for "Angular Developer" ranges from somewhere around $92,814 per year for a Developer to around $113,069 per year for Full Stack Developer.

Getting Started with Angular

Learning Aim: This module introduces the learner to the basic, MVC architecture, fundamental
constructs of web application development, about Angular, and the differences between multiple and
single-page applications. The learner would also learn about the installation of Angular and making
use of NPM packages.

Learning Aim: In this module, the learner would be taught about Angular Components and also Data
Binding. The learner shall learn how to construct the application layout via selectors, styles, and
templates.

Directives and Pipes in Angular

Learning Aim: In this module, the learner would be taught the art of manipulating DOM and adding filters via Angular directives and pipes.

Learning Aim: In this module, the learner shall learn how to create Angular services and inject it through the dependency injection. Furthermore, the learner would learn how to perform HTTP requests and cater to the backend servers’ responses.

Learning Aim: In this module, the learner would be taught how to configure Angular routes and navigate through several different components.

Hands-On:
• Making use of route guards in order to prevent navigation into several different pages
• Construct a server management application and also make use of routing

Learning Aim: In this module, the learner would be taught how to deal with building a form through two approaches, that is - template-driven and also reactive. Furthermore, the individual would learn about the underlying constructing blocks of the form model and kinds of directives with regards to the two types of forms.

Learning Aim: Herein, the learner would be taught how to deal with reactive forms.

Authentication with JWT and also Security in Angular

Learning Aim: In this module, the learner would be taught how to perform authentication of the application via JWT (JSON Web Tokens)

Learning Aim: In this module, the learner would learn to perform the intricate application testing and
eventually learn to deploy the application via Nginx and Docker.

Topics:
• Testing
• Why is there a need to perform testing?
• Kinds of testing
• Testing Angular application using Jasmine and Karma
• Maintaining application code using Git
• Version control system
• Why should we use Git?
• Git file workflow
• Running application on the production server: Nginx
• How to configure Nginx?
• Architecture of Nginx

Learning Aim: In this module, the learner would perform an in-class project on the basis of all the Angular 8 concepts that he has been introduced and familiarized within the eclectic CertOcean's Angular certification online course.

Angular is one of the most dynamic, modern, performance-efficient, and highly powerful front-end frameworks that one can learn today. The powerful features and capabilities of Angular permit the user to develop a strong and a responsive web application. It is also supported by Google and furthermore, it is built entirely in TypeScript. The smooth ease with which Angular operates in sync with MVC components makes it a very popular and famously known technology. One of the most sublime features of the Angular framework is that it is incredibly flexible when it comes to the usage of external libraries. With the great adoption of the Angular framework, there is community- driven performance management of the application, thereby indirectly driving more significant job opportunities.

2. What are the cardinal objectives of our Angular Certification Course Training?

Post completion of the CertOcean’s Angular Certification Online Training, the learner would be able to:

3. Who should opt for Angular Certification Course Training?

4. What are the pre-requisites of this Angular Certification Online Training?

Fundamentals of object-oriented concepts i.e. HTML + JavaScript Knowledge + CSS (One doesn't need to be an expert but should be familiar with the very basics of these topics)

5. What are the system requirements for this Angular Certification Online Training Course?

6. How would the learner execute the practical in Angular Certification Online Course?

All the Angular applications would be built and debugged through Visual Studio Code Editor. The intricately detailed step by step installation guides have been made available on the LMS. Also, CertOcean's 24/7 technical support team is always there to promptly assist an individual in case of any
queries.

7. Which Angular projects are a part of this Angular Certification Online Training?

Background: Mytrip.com is an online web application that is designed through old asp.net technology.
This is a rapidly-growing web application with a customer base of approximately 1 million users.
With the sudden mushrooming in web traffic, maintaining the website was rather tedious and difficult for the development team. Hence to overcome this limitation and ameliorate the user experience, the company decided to upgrade its website through the Angular framework.

Primary Objective of Angular Certification Course Project - The primary objective of this project is to construct an online Bus Ticket booking application accompanied with an effortless seat selection and also payment process through Angular Framework.

Background: Friends Book is a web application that permits users to interact with people virtually, thereby creating a network of friends. It is designed through traditional web development methodologies. With the sudden augment in the number of users, the website load time has magnified significantly that in turn has diminished the performance and speed of the website. Also, there is absolutely no way to stop unauthorized access to the restricted part of the website. Hence in order to overcome all these various challenges, the company decided to upgrade its website through Angular Framework.

Primary Objective of Angular Certification Course Project - The primary objective of this project is to  construct a RESTful web application that can be smoothly adopted by users in order to engage the users in social activities.

Background: FoodOrb is a famous online food ordering application designed using Laravel/ PHP framework that permits a user to place a food order from any nearby food outlet and get it delivered to
his/her home. Since the application makes use of Laravel/ PHP framework for its design, the complexity to code is quite high and furthermore, it does not support any incremental updates. It is also devoid of the flexibility to ameliorate either back-end or front-end alone, and also there is an unnecessary implementation of business logic. All these umpteen challenges led to upgrading the website through the Angular 8 Framework. The Angular web application is solely constructed by alluding to the legacy application code that the developer is provided with.

Primary Objective of Angular Certification Course Project - The primary objective is to relocate the legacy application to a RESTful web-application built through the complex framework of Angular 8.

Each class will be followed by a practical assignment to help you apply the concepts taught during the class.

Each class shall be followed by a unique quiz to assess and gauge the learning of all learners.

You get lifetime access to LMS where presentations, quizzes, installation guides & class recordings are available.

We have lifetime 24x7 online support team to resolve all your technical queries, through ticket based tracking system.

Sucessfully complete your final course project and CertOcean will certify you as a Angular Developer.

We have a community forum for all learners that facilitates easy learning using knowledge sharing and constant peer interaction.

1. What if the learner misses his class?

Learners associated with CertOcean never miss any lecture, and we assure you of that as you can choose either of the below mentioned two options:
• Attend the missed session(s) in some other live batch.
• View the recorded session(s) of the class that is exclusively available in your LMS.

2. What if the learner has queries post completion of the CertOcean's Angular Certification Online Training?

A learner can access our Support Team for a lifetime and this would be available 24/7. Our team shall
help the learner resolve any queries, during, and even post completion of the Angular Certification Online course.

After successful enrollment, the LMS access shall be instantly provided to the learner, which would be available for a lifetime. The learner would be able to access the complete set of previous class recordings including all the PDFs, PPTs, and assignments. Furthermore, access to our on the go, 24/7 support team would be granted instantly at that very moment. Hence the learner can start learning right away.

Yes, the access to our Angular Certification Online course material would be available for a lifetime once the learner has enrolled in our course.

5. Is there any demo session that a learner can attend prior to enrollment?

We allow very few, limited number of participants in our live session in order to maintain our Quality Standards. Hence, unfortunately participation in a live class without enrolment shall not be possible.
However, the learner may go through our sample class recording as this would give a clear insight into our classes conducted, and also demonstrate the teaching pedagogy of our highly experienced instructors and the level of student interaction in our unparalleled classes.

6. Who are the instructors at CertOcean for Angular Certification Online Course?

All of our instructors at CertOcean are experienced practitioners from the Industry, holding a minimum of 10-12 of years relevant experience in IT. Our instructors are subject matter experts and are trained by Cert Ocean for rendering an unparalleled, one of its kind and the most sublime learning experience.

7. What is the best way to get a hold over the knackering Angular?

CertOcean’s Angular Certification Course is the most sublime training that a learner would encounter
to master Angular 8 concepts and thereby look forward to make a career in this domain.
However, do check out our YouTube Channel and also our Blogs to access our unique tutorials and to
get started with Angular and its very fundamental basics.

8. What about the career progression and the opportunities post learning the eclectic Angular?

Angular is rampantly used in front-end technology. This can be very well attributed to the cardinal fact that Angular renders extremely optimal solutions for any kind of web application i.e. needed. Also, with more and more organizations that are now adopting Angular, the need for skilled developers is at a sudden, unprecedented height, and this shall continue to expand and grow.

9. What are the skills required to master Angular?

10. What about the future scope of Angular?

There are several different frameworks in the market that the learner may utilize in order to create web applications based on the required needs. The very reason why Angular dominates the market is due to the virtue of its versatility. It can render solutions to construct dynamic web apps that work seamlessly. Due to this, we can therefore assume that Angular would continue dominating the market in the long run. With this domination, the need for skilled Angular developers shall also expand and would be really high.

11. Why take an online Angular Certification course and how is it better than the offline course?

It is extremely evident that the learning pedagogy has rapidly evolved with the advent of technology over the past few years. Online training unequivocally helps add quality and convenience in to the training module. With our 24/7 support system, our online learners shall constantly have someone to assist them all the time, even after completion of course. This is one of the salient driving factors to ensure that all our individuals achieve their goal learning objective. We also render life-time access to all our updated Angular Certification Online course material to our learners.

12. What is the average salary of an Angular Certified professional?

Angular developers are in constantly high demand in the eclectic job market. The average salary of an Angular Developer is approximately around $113,069 per year
4.3

Find the Best course and Build your Future